A child demonstrating learning or behavioural problems, little interest in school work or difficulties in reading, writing, grasping Maths concepts or under-achieving in school, may be experiencing weaknesses in his or her visual, auditory, sensory-motor, attention or social-emotional brain fitness. When these weaknesses become significant, the child may fall within the diagnostic criteria of having a learning difficulty or disability.

It is important to remember that many children who suffer from learning difficulties may have average or even above average intelligence! These children may sometimes be misunderstood as being “lazy” or “dumb” but this cannot be further from the truth! We now understand that learning difficulties or disabilities are a manifestation of abnormalities in the brain, resulting in problems with information processing. Some children may experience more than one type of learning difficulty. This is possible because more than one system in the brain may be affected.

Some common learning difficulties are

Nine-year-old Nicole was often called “Sotong” in front of her class by her teacher and she has since become the butt of jokes among her classmates, with nicknames such as “blur queen”. Her mother, Yvonne became concerned and upset at the same time. This labeling upset and depressed Nicole. It broke Yvonne’s heart when Nicole insisted that she was “stupid”.

Yvonne eventually got Nicole assessed and it was concluded that Nicole was definitely not “blur” and there was nothing wrong with her hearing or intelligence. She was found to have an Auditory Processing Disorder. Thus she often processed only part of what she heard and often misunderstood what was said.

According to Yvonne, Nicole struggled to keep up in class. When the teacher gave an instruction, she always had to ask her classmates to repeat several times what had been said. Nicole had problems with comprehension exercises. “She was able to read entire passages out loud, pronouncing each word perfectly. Yet she wasn’t able to answer any of the questions correctly”, said Yvonne.

Finally, after reading about BrainFit Studio’s programmes on the newspapers, Yvonne decided to try brain fitness training for Nicole. Yvonne began to see improvement in Nicole’s condition after several sessions of SMART Listening on Fast ForWord and SMART Moves. “She was able to express her feelings better than before and seemed to have matured. The teacher in school has also seen improvement in Nicole’s schoolwork. Now I don’t have to keep repeating my instructions to her and Nicole’s doesn’t feel she is “stupid” anymore. I am truly grateful for the help my daughter has received!”

– Nicole* (Singapore)
* Names have been changed to ensure confidentiality.

About 15%-35% of students who attend BrainFit Studio present with a diagnosed learning difficulty.

THE TYPES OF LEARNING DIFFICULTIES WHICH ARE PRESENTED TO US ARE

Some students who present with learning difficulties may need one-to-one attention on our SMART programmes for greater individualized training. Again, the following “before” and “after” changes were seen without the students actually having practiced writing on these handwriting worksheets. 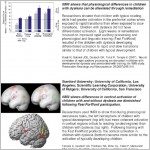